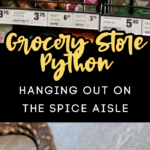 A woman was casually shopping in the spice aisle of her grocery store, when she came eye-to-eye with a 10-foot python.

You can just add this to my list of reasons NOT to visit Australia.

Sure, I have friends there. Sure, it is the land of Chris Hemsworth. Sure, it has been on my bucket list for places to visit at least once before I die.

BUT, there have just been far too many creepy-crawly incidents there as of late to make a trip worth my while.

I mean, have you SEEN the ghoulish spider webs that have been spotted in Australia? That’s a NOPE for me.

And, I mean, if snakes are common enough to end up in the spice aisle of the grocery store. That’s a hell-no for me.

LUCKILY, Helaina Alat, who happened upon the snake, is a trained snake professional.

Thankfully, I have a background in snakes so I was pretty calm about it. It definitely shocked me a little bit because I wasn’t expecting it.

Now, this was a non-venomous diamond python. But, really, do I care? It was a big dang nope rope.

This all went down in a Woolworths in the Sydney suburb of Glenorie. And, that’s one store I will not be visiting anytime soon.

Once it was sighted, our team members reacted quickly and calmly to cordon off the area for the safety of customers.

Being the stealthy snake catcher that she was, Helaina quickly ran home and grabbed her snake grabbing equipment.

She went and released this monstrous dude into a nearby wooded area (which means it’s still out there.)

I think we can all agree that the moral of this story is Never Go To Australia. But, if you must go to Australia, avoid the Woolworths in Glenorie like the plague.

You can watch Helaina Alat’s snake video on the Scoree site on YouTube, HERE.