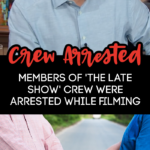 I have always wondered why this kind of thing doesn’t happen more often.

We watch TV shows — and now TikTok videos — all the time where people are unruly or pulling pranks on the public just to get a laugh.

Members of a production crew for “The Late Show With Stephen Colbert” were in the middle of filming a bit for the show, and ended up getting arrested.

That would royally suck. They were told what to do by — I’m assuming — their bosses. But, they wound up in handcuffs, being escorted to the police station in a fancy cop car. LOL!

The crew was filming the last little bit for a segment with Triumph the Insult Comic Dog when the arrests happened.

Now, you’d think that, with Triumph’s history*, the team got arrested because they were being crazy, over-the-top with the insults and actions of the canine puppet.

But, that’s not the way it went down.

According to The New York Times, the production team had just finished up some interviews with members of Congress. They were finalizing and filming the “final comedy elements” for the show in the hallways of the Capitol Building.

It’s important to note that these were pre-arranged interviews, so SOMEONE knew they were going to be there at that time.

Apparently, the crew had already been told to leave by police, but they were still in the building at the time it became “closed to visitors.”

Seven people were arrested, and the charge was unlawful entry — but more charges may be filed after an investigation of the incident goes down.

Now, if you believe Tucker Carlson from Fox News, Triumph was there to harass members of Congress and commit “insurrection.”

It’s exactly like what happened on Jan 6., so we’ll take a close look at what the punishments are.

*Triumph has gotten kicked out of the Westminster Kennel Club Dog Show, the Honolulu line for the American Idol auditions, and the 2004 Democratic National Convention — among his other antics.