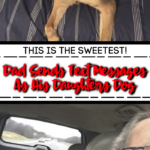 So, there is this girl named Meghan that had adopted a 4-year-old dog from Richmond Animal League originally named Chap.

Chap had been shot and that had resulted in him having a shattered jaw and a surgery where he had a metal plate put in.

Afterward, he was brought to Richmond Animal League where Meghan met and fell in love with him.

She changed his name for a fresh new start to Chance, because a new life is deserving of a new name!

Meghan named him after Chance the Rapper and also it was a fitting name since he was given a second chance at a great life!

Well, Meghan had an opportunity to go visit New York City and she needed someone to watch Chance while she was gone.

She chose to have her dad take care of her best friend while she was away on her trip to New York City!

Once Meghan got to New York City she started getting text messages from her dad, who obviously was having a great time with his granddog!

All of the text messages are written as if they came from Chance and that he is hanging out with his grandpa!

I absolutely love this story! My dad was a huge dog lover and I could totally see him doing something like this!

Great story! Thank for the uplift!