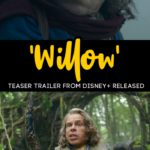 ‘Willow’ is one of my favorite movies, the original came out way back in 1988 and it was a dark fantasy-style drama.

When Disney+ announced they were turning ‘Willow’ into a series I was so excited!

The original ‘Willow movie was directed by Ron Howard and he returned to this project as executive producer.

An epic period fantasy series with a modern sensibility set in an enchanted land of breathtaking beauty, “Willow” features a diverse international cast.

The story began with an aspiring magician from a Nelwyn village and an infant girl destined to unite the realms, who together helped destroy an evil queen and banish the forces of darkness. Now, in a magical world where brownies, sorcerers, trolls, and other mystical creatures flourish, the adventure continues, as an unlikely group of heroes set off on a dangerous quest to places far beyond their home, where they must face their inner demons and come together to save their world.

‘Willow’ will premiere on November 30th, 2022, exclusively on Disney+ and I am SO ready, will you be watching?