Elon Musk Used His ‘SNL’ Monologue To Reveal He Has Aspergers 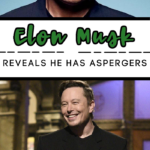 Many questioned their choice in having Elon host the show — I know I was confused about the choice — because he is kind of dry and doesn’t seem like he would exactly excel in the comedy realm.

Elon addressed those concerns during his opening monologue, when he announced to the world that he has Asperger Syndrome.

I don’t always have a lot of intonation or variation in how I speak… which I’m told makes for great comedy. I’m actually making history tonight as the first person with Asperger’s to host SNL.

Elon Musk in his SNL monologue

So many questions about his demeanor fell into place when he made the announcement.

See, people with Asperger Syndrome can have difficulty with social interactions, and they can have a hard time with communicating in conversations with people.

They can also be — what I think of as — awkward in their nonverbal conversation skills.

On the plus side, they can be remarkably focused and persistent, have great attention to even the smallest details, and they also have a great ability to recognize patterns.

It does NOT affect their intelligence, just their ability to communicate — to send and receive signals.

HELLO! Elon made himself a billionaire with his focus on his business, a great persistence, and a strong attention to detail.

I don’t know why we didn’t see this before!!

The dude is a genius, and the Aspergers just might be his super power!

“Look, I know I sometimes say or post strange things, but that’s just how my brain works,” he said. “To anyone who’s been offended, I just want to say I reinvented electric cars, and I’m sending people to Mars in a rocket ship. Did you think I was also going to be a chill, normal dude?

Elon Musk in his SNL monologue

So, Elon announced that he is the first Saturday Night Live host to have Asperger Syndrome.

(Which isn’t ENTIRELY true. Did you know Dan Aykroyd has Aspergers?!?)

And, then he got to the skit part of the show — and he was actually FUNNY!!

He poked fun at himself for smoking a joint on the Joe Rogan podcast — now everyone thinks he is a pothead. LOL!

With all that said and done, I applaud Mr. Musk for getting up there and doing his thing on SNL.

It took bravery and guts, and I can’t say I’d be able to do the same.

1 shares
Toilet Paper Is About To Become More Expensive, So It's Time To Stock Up
← Previous
People Are Making 'Barkcuterie' Boards For Their Dogs and It's The Cutest Thing Ever
Next →
Click here to cancel reply.