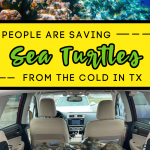 People in Texas are ill-equipped to deal with the weather that they have been pummeled with this week.

But, PEOPLE aren’t the only ones who are having a hard time dealing with the ginormous dip in temperature.

All along the coastline of Texas, sea turtles have been greatly affected by the life-threatening cold.

LUCKILY, there are people who have rushed to the turtles’ rescue, and have taken to filling their cars with these cold-blooded creatures who aren’t made for such weather.

Sea Turtle, Inc. is a wildlife sanctuary on South Padre Island, and they have been working to save as many sea turtles as possible during this crazy time of insane weather.

Because the sea turtles are cold-blooded creatures, they can’t regulate their internal temperatures when it gets hella cold outside.

The turtles have been, quite literally, paralized by the frigid temperatures.

Since they are pretty much frozen, they aren’t able to move or swim, which means that they are at risk for drowning.

The volunteers at Sea Turtle, Inc. are filling their cars with sea turtles, and transporting them to a safer location.

The South Padre Island Convention Centre and Visitors Bureau has stepped up to help with the problem.

The sheer number of turtles at the convention center is overwhelming, but it is a touching reminder of how good humanity can be.

Each turtle represents a life that was saved by a human, and that’s pretty great in my book.

When the weather gets warmer, these turtles will hopefully be able to be taken back to their “homes,” where they will be able to go on living a long and healthy life.

Thank you, Sea Turtles, Inc. volunteers!! Save all the precious sea turtles!!

1.2K shares
There Is Another New COVID-19 Symptom And This Time It Has To Do With Your Eyes
← Previous
Texans Are Making Videos To Show Us The Results Of The Winter Storms And They Are Devastating
Next →
Click here to cancel reply.