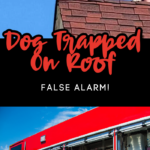 Imagine driving by an apartment complex, and spotting a big ol’ dog perched on the roof. I bet you’d panic, and think the dog was in dire need of help.

That is exactly what happened in Hazelton, Pennsylvania. The fire department was called to assist a dog that had been spotted high above an apartment complex, hanging out on the roof.

The false alarm started when a passerby spotted the large pooch on the top of an apartment building. Worried that the canine was a stray dog in trouble, the passerby dialed 911 and asked for rescuers to come and check on the pet.

When the fire department showed up on the scene, they were told that it was a false alarm.

This pup, in fact, liked to hang out on the roof. He apparently didn’t have a problem with the height, in fact, he seemed to dig it.

Local firefighters responded to the call, and when the first responders arrived, they found a white and black pup calmly standing on the apartment building’s roof with a third-floor balcony door open behind them. Rescuers deduced that the dog had used the balcony door to gain access to the roof, but the firefighters weren’t sure then if the pup meant to go up on the roof or not.

Firefighters pulled aside a resident, and asked them what was up with the dog on the roof. Apparently, the dog lives in the apartment complex, and he frequently visits the roof. It’s kinda his thing.

The owner of the dog was not able to be reached.

But, never fear. The firefighters never even had to attempt to climb up and get the dog. He mosied off the roof, and went inside his apartment while the men stood there watching.

See, happy endings do happen! If you’re having a bad day, just think of the pup standing on the roof with a plethora of firefighters beneath. You’re sure to get a little giggle.

Want another shot of pup cuteness? You have to check out Lou, the dog with the longest ears in the world. He’s like a little doggie version of dumbo!!