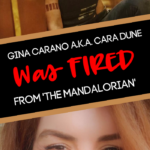 If you have watched the first two seasons of The Mandalorian — and, who am I kidding, you have — you know that character that is Cara Dune.

Carasynthia “Cara” Dune was a human female Alderaanian who served as a shock trooper in the Alliance to Restore the Republic and the New Republic during the Galactic Civil War. A seasoned warrior, she was an intimidating brawler and a crack shot.

You might notice it says she “WAS” a human female Alderaanian. That is because she has been fired from the series, her new spinoff, and any other future Star Wars endeavors.

She has previously conveyed messages of transphobic and anti-binary personal ideas, and she is known for denying the validity of the coronavirus pandemic.

But, it is her last foray into controversial social media posts that got her axed from the Star Wars franchise.

She stupidly posted a story on her Instagram account that suggested that “reactions to her unpopular political and social beliefs were akin to the treatment of Jewish people during the Holocaust.”

Now, the story has since been deleted from her Instagram account, but that wasn’t before the damage had already been done.

People immediately took to Twitter to react to her contentious Instagram story, and said it was, rightly so, anti-semitic.

The hashtag #FireGinaCarano was trending on Twitter, and the powers that be at Lucasfilm apparently caught wind of the situation, and Gina Carano is no more.

Gina Carano is not currently employed by Lucasfilm and there are no plans for her to be in the future. Nevertheless, her social media posts denigrating people based on their cultural and religious identities are abhorrent and unacceptable.

There is no word on how they will handle this on The Mandalorian. Will they replace her with a new actress? Will they kill her off? We will just have to see.

What do YOU think about the firing of Gina Carano?