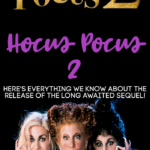 I’m so excited for ‘Hocus Pocus 2’ to be released!

In 2019 we learned that there would be a sequel coming out for the cult Halloween classic ‘Hocus Pocus’.

It’s been something many of us have been waiting on for so long, and the time is finally near!

Bette Midler, who stars as Winifred Sanderson, made an Instagram post last year officially announcing the sequel was in production.

When Bette and her witchy cast members announced that they would all be returning in ‘Hocus Pocus 2’, Disney also re-posted those messages to its own accounts.

As of now, Disney hasn’t announced the entire cast for ‘Hocus Pocus 2’, but we do know that all of the Sanderson Sisters will be played by the originals.

Doug Jones (Billy Butcherson) had said he would return if the sequel happened, so maybe he will be in the new film as well.

There hasn’t been any word about the storyline for the sequel, I can’t wait to see what they do because it has been way too long!

Right now you can stream the original ‘Hocus Pocus‘ on Disney+ during the 31 Nights of Halloween on Freeform to hopefully tide you over until next year.

Disney has announced that ‘Hocus Pocus 2’ will release on Disney+ in the fall of 2022, but still no word if it will also be shown in theaters at this time.

I’d love to be in the movie