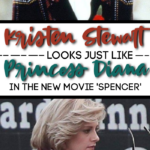 Kristen Stewart is NOT my favorite actress, and since this is MY post, I will go ahead and tell you she was AWFUL in Twilight.

There. I said it.

So, when I heard that KS was playing Lady Diana, The Princess of Wales, I just about fell into a heap on the floor, and sobbed my way into tomorrow.

I have GREAT respect for Princess Diana, and I couldn’t believe they were defiling her in such a way.

I mean, come ON! They are going to have Bella Swan from The Twilight saga — Sabina Wilson from the new Charlie’s Angels — play such an iconic historical figure as LADY Diana.

BUT, just wait, I am about to say something nice about KS.

After seeing the first pics of Kristen Stewart as Princess Diana, I may just not hate it.

I mean, I’ll have to see the final product of the film to give you my full assessment, but Kristen is just about pulling off the look.

I have to admit, I want this movie to be so much like The Netflix original series, The Crown, but we will just have to see.

Emma Corrin pretty much pulls off Diana of Windsor, AMIRITE?!?

I’m obviously not the ONLY one who thinks so, since she just won the Golden Globe for Best Actress in a Television Drama!

But, maybe I can’t compare the two. I just have to see the series and the movie as what they are: separate entities that both center around Diana.

Spencer is supposed to drop this fall. It is still up for debate whether that means in an actual theater.

The movie is going to be about one weekend that the Princess spends with the British Royal Family before deciding to divorce Prince Charles.

Here’s hoping it is going to be excellent.

What do YOU think of Kristen Stewart playing Lady Diana? Does she at least pull off the look??

I am by no means a fan of Kristen in Twilight, but your degradation was so unnecessary and so off-putting to read.