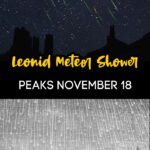 It’s time to grab your telescopes, put on your warmest coat, and head outside, because the Leonid meteor showers are set to peak on November 18th.

Granted, you don’t really need a telescope to see the meteor show, because a lot of the falling stars can be seen with the naked eye.

The Leonid meteor showers are a yearly event that occur in November and go through roughly December 2nd.

According to CNN, the Leonid meteor showers turns into a meteor storm about every 33 years, where thousands of “falling stars” can be seen.

Now, this year isn’t a “storm” year, unfortunately, but stargazers can expect to see about 10 to 15 “falling stars” per hour.

What also makes this year pretty amazing is that along both coasts, there are clear skies in the forecast. So, it’s going to be a pretty spectacular — be it cold — show.

Bundle up, and get yourself outside!!

According to Robert Lunsford, fireball report coordinator for the American Meteor Society, it is quite possible that, “for a short time on Saturday morning at around 1 a.m. ET, there could be up to 250 meteors visible per hour.”

A Bit Of History About The Leonid Meteor Showers

In the pre-dawn hours of November 12, 1833, the sky over North America seemed to explode with falling stars. Unlike anything anyone had ever seen before, and visible over the entire continent, an Illinois newspaper reported “the very heavens seemed ablaze.”

An Alabama newspaper described “thousands of luminous bodies shooting across the firmament in every direction.” Observers in Boston estimated that there were over 72,000 “falling stars” visible per hour during the remarkable celestial storm.

Joseph Smith, traveling with Mormon refugees, noted in his diary that it was surely a sign of the Second Coming. Abraham Lincoln, Frederick Douglass, and Harriet Tubman, among many others, described seeing it. It became known as “The Night the Stars Fell.”

It’s pretty cool that something seen by people so long ago can still be seen today!!

Make sure you head on outside during the wee morning hours on the 18th. You’re sure to catch a pretty amazing meteor show.