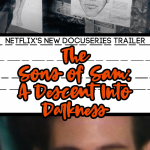 If true crime is your binge-watching obsession and you’ve already sailed through the Cecil Hotel and The Night Stalker docs… add this one to your must-watch list!

Netflix’s ‘The Sons of Sam’ is said to challenge everything that we know about the case. The docuseries trailer hints that David Berkowitz’s killing partner is still out there.

They totally ignored the true story in this case.

a voiceover says in the trailer

The trailer for ‘The Sons of Sam: A Descent Into Darkness’ was just released by Netflix on April 7th. It will go over the theory of the serial killer having accomplices, either many or even just one.

Now the case has been considered a closed case since David Berkowitz was captured back in 1977. He received 6 life sentences for his serial killing spree.

Even though it was considered a “closed case” after Berkowitz’s capture in 1977, the documentary highlights some reports suggesting he had an accomplice in the attacks.

Berkowitz had even said at one time that members of a satanic cult helped with the murders. Is that true?

I did not pull the trigger on every single one of them.

There is also evidence that just doesn’t add up, like police sketches where the serial killer was described as a blonde guy that was 6 feet tall. Yea, not a match.

‘The Sons of Sam: A Descent Into Darkness’ is a 4 episode docuseries that will explore all of these theories.

It will be available for streaming on Netflix on May 5th and I can’t wait!