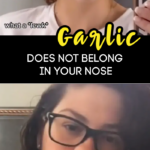 There is a trend going around TikTok that has people sticking cloves of garlic up their noses, and doctors are warning that it is a bad idea.

Really? A doctor had to warn us of this. I learned not to stick things up my nose when I was like 2 years old.

Ya know, I sometimes wonder if people even think about what they are doing before they turn on that camera to try to film a viral video.

Have we learned nothing from the Dry Scooping trend, the dangerous Blackout Challenge, people catching themselves on fire with the Fire Challenge, or even the fiasco with the Gorilla Glue Challenge?

NOW, there is a whole group of people who are trying this so-called Garlic Challenge, and I simply don’t understand.

I love me some garlic, but only when it’s being used in a good bowl of spaghetti or as a marinade for a breast of chicken.

I sure don’t want that mess shoved up my nose.

What happens if that garlic is peeled or cut, exposing the inside of the garlic?

Just using the logic portion of my brain, I can guess it would be unpleasant at best.

Have you ever accidentally gotten garlic in your eyes or even simply tried to taste a piece of raw garlic?

It burns. It burns bad.

So, people are inserting garlic into their nostrils as a natural remedy to clear their sinuses of mucus — they have thick ol’ boogies clogging up their nose passages, and they want to get rid of the snot.

Rozaline Katherine, the personal trainer who was one of the first to go viral on TikTok for sticking cloves of garlic up her nose, says the remedy works wonders, and takes about 10 to 15 minutes to work.

But, just because it works, doesn’t mean you should do it.

Setting alcohol on fire works, but it’s not something you should do — you will explode.

Doctors are now warning people to stop sticking garlic up their nose.

Not only can the garlic get stuck — lodged in those sinus passages you are trying to clear — but you can get contact dermatitis.

If you do this enough, the body will start to react to the oils and chemicals in the garlic and cause contact dermatitis in the nose.

You can get contact dermatitis over any part of your body. It is simply an inflammation of the skin.

It causes burning and itching, and can even sometimes cause rashes and blisters, something I’m guessing you don’t want to experience in your nose holes.

Some garlic cloves are really strong, and if you get enough leaching of the chemicals and oils into your nose, it will definitely irritate it,

Y’all, if you can’t get the garlic out, it can rot, cause a blockage in your sinuses, and make you sick, sick, sick — and if it’s bad enough, you will have to have a surgical procedure to get it out!

Trust me, I’ve been in plenty of surgeries where doctors are digging things out of people’s noses — it’s not pretty.

Let’s say this together — “We don’t have to do everything we see on TikTok.”

Just don’t do it.