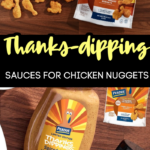 Perdue Chicken released turkey shaped chicken nuggets last year for the holiday of giving thanks, and now the chicken company wants to pair their nuggets with a friendly dipping sauce.

Similar to Perdue’s turkey shaped chicken nuggets, the turkey on Thanksgiving is nothing compared to the sides.

To pair with your turkey shaped and drumstick chicken nuggets, Perdue is releasing two dipping sauces for dunking purposes only.

Alongside the sweet potato seasoned nuggets, you can just barely or completely dip your chicken in Spiced Apple Honey Mustard, inspired by herb-and-apple stuffing or the CranBBQ sauce that tastes similar to cranberry sauce with an added smoky flavor.

Starting tomorrow, both bottles of sauces will be only available in limited quantities with the purchase of the original “Thanksnuggets” on Perdue’s website.

Beginning at 9am EST tomorrow on Friday, November 5, you can snag the two bottles to pair on with your Thanksgiving turkey, I mean chicken nuggets on the day we give and spread thanks.