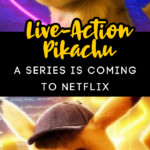 OMG!! Netflix is working on a live-action Pikachu series, and I can’t freaking wait!!

Pokemon is STILL all the rage with the kiddos. Thanks to games like Pokemon GO, Pokemon X and Y, endorsements by the likes of Post Malone, a Pikachu live-action movie, and of course, the Pokemon card game, Pikachu and the gang are still going strong after 30 some-odd years.

The kids (and adults, alike) are going to FREAK when they find out that there is about to be a new show dedicated to that to the adorable little yellow dude — and it’s LIVE ACTION!

Not much is known AT ALL about this new series. We don’t have a name or a plot yet, but it’s enough just to know it’s on the way.

We do know that Lucifer show-runner, Joe Henderson, is set to write and executive produce the new Pikachu show.

Netflix is already the home for all things Pokemon, including shows like Pokemon: Indigo League and Pokemon Journeys, which are currently on repeat in my son’s room — I’m surprised he doesn’t quote the dialog along with the show!

They have also dipped their toes into the business of recreating video games into popular original streaming shows (The Witcher), and bringing anime to the forefront of pop culture.

It isn’t really a surprise that they would delve into the world of an original Pikachu series, but it IS a special bombshell that they chose to make it a live-action show!

I can’t wait to see what other Pokemon characters end up in this live-action version of Pikachu.

Aren’t you totally stoked for this new live-action Pikachu series?!?