When I was little, we couldn’t even go to the mall after Thanksgiving. The department stores were okay, Mom tells me, but as soon as we approached the main mall where SANTA CLAUS was, I’d start screaming like I was being murdered.

Now that Santa shows up around Halloween, I can’t let it dominate my life. And yet it follows me. First November in my new house, one day I opened the blinds on my bedroom window, and what looked back at me?  A FREAKING CAR LOT SIZED INFLATABLE SANTA in the neighbor’s yard, that’s what.

I’m not saying I slept in the guestroom on the other side of the house for a month.

But I slept in the guest room on the other side of the house. The truth is Santa is creepy AF and we all know it and we pretend like we don’t. 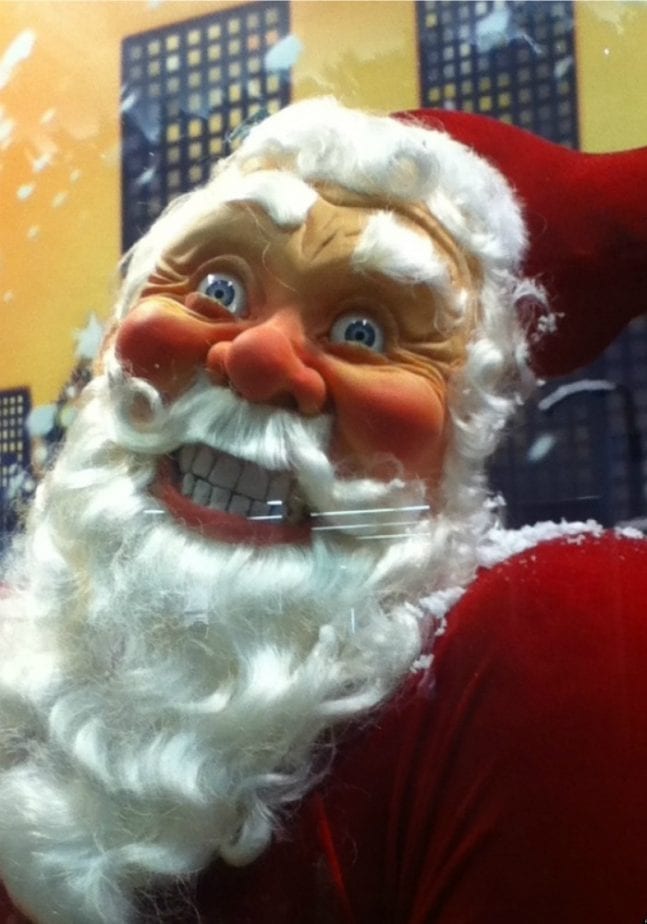 Santa Is Creepier Than The Creepiest Clown

Here’s the pitch for this blockbuster home invasion thriller. The trailer is a series of cross cuts, underscored individual notes. They should like they may create a familiar sequence, but it’s still unrecognizable.

INTERIOR of Family Home: WOMAN humming as she putters in her kitchen.

Cut to OVERHEAD SHOT of the snow-covered roof.

INTERIOR camera pans past woman into a modest living room, where children play under an artificial tree.

EXTERIOR, POV shot approaches chimney. A red-mittened hand appears on the chimney ledge as the camera travels down into the sooty tunnel with a cheery light at the end. It continues to the INTERIOR where it tracks to the woman, her back to the fireplace. The tracking shot breaks away toward a shiny round ornament reflecting the distorted face of Kris Kringle—rosy cheeks, red nose, the rest hidden by fluffy white beard, eyebrows, and fur hat.

HOLIDAY MUSIC continues under sounds of screams and struggles.

Seriously. What kind of twisted mind decided that this was a HAPPY HOLIDAY STORY.

Look, it’s not that weird.

Okay, maybe it is, but it’s not like I don’t have reasons:

My parents let me in on the Santa secret early, for obvious reasons. They neglected to explain that I should keep this information to myself. I was not a popular kid at school when Christmas rolled around.

So chalk THAT up to my nemesis, too.

Okay, look. I’m not actually afraid Santa is going to break into my house and murder me. I don’t think Michael Myers is going to come after me at Halloween, either, but that doesn’t mean that guys in hockey masks aren’t creepy.

And I just can’t escape it. Like the fact that my pen name (Clement-Moore) is the same as the guy who wrote the Night Before Christmas (Clement Moore). Like the inexplicable rumor that I collected Santa Claus figures so I kept getting them from friends and students for Christmas. As gifts. That I had to display.

Or rather I had to keep in a box ready to put out quickly when company was coming.

I’m not saying that box got lost in my last move.

But it totally got lost in the last move.

Though I totally expect them to mysteriously show up one day.

Possibly having come to life.