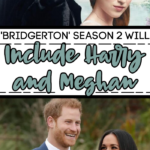 Well dear reader, if you thought season 1 of Bridgerton was full of drama, scandal, and love, consider season 2 the next level up.

Lady Danbury, aka Adjoa Andoh gave Entertainment Tonight the lowdown on what to expect in the next season and let’s just say, the show is graduating from the kiddie table to the adults table on Thanksgiving.

Fans of ‘Bridgerton’ can expect a Prince Harry and Meghan Markel storyline to be included in season 2.

“I really can’t say too much nor would you expect me to, but I guess what we do know absolutely is that they’re married now. It’s a new married life and they have the baby, so there are all the vagaries of what that is like for young people with a new baby,” she explained. “I mean Harry and Meghan, what’s it like when you have a new baby? How does it affect you when [you are] a young couple with a new baby?”

“I just think we’re going to see how Phoebe and Rege’s characters, Daphne and Simon, navigate being in love, very in lust still, but with a new baby in their lives. Having to navigate and negotiate that between each other, between their families, and between their wider social circles. Yeah, it’s going to be interesting… [And with Simon], how do you father when you haven’t even fathered [or had a father]?”

Alongside a storyline that is similar to Prince Harry and Megan Markel, Adjoa Andoh let loose that the steamy love scenes are also making a return for season 2!

“I think season two will be full steam ahead,” Andoh told ET.

We also know that season 2 will primarily focus on Daphne’s brother Anthony Bridgerton, with his quest to find a wife after his one shot at true love in the first season came spiraling down.

“This is only the beginning. It’s just going to get more exciting, convoluted, and sexier.”

We can also thank Luke Newton, who plays Colin Bridgerton on the show for uploading a few images on Instagram that feature captured moments on the set of season 2!