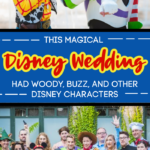 I am so jealous that I didn’t think of this first!

This couple had an entire wedding themed around DISNEY — my FAVORITE thing on earth — complete with a Toy Story cake and guests dressed as their favorite Disney characters, and I totally love it!

Y’all!! I nominate them for the BEST. Wedding. Of. All. Times!

Jason Bitner and Garrett Smith, the happy couple, are a pair with whom my Mickey-loving heart can relate.

The pair grew up watching and loving Disney movies, like so many of us did.

They became a little more obsessed with the whole world of Disney when they spent some time together at Disneyland soon after they started dating.

As their relationship grew, they stayed true to their shared love for all things Disney.

When they decided to tie the knot, they chose to make the day special in every Disney way possible, including showing up to their reception decked out in full Woody and Buzz costumes.

A lot of people would have thought you could dress up as a prince. That’s a little bit more cliché. Buzz and Woody were the only (characters) that seemed to make sense for us.

Not only did they don their Disney duds, they asked their guests to show up as their favorite Disney characters — and almost every guest complied!!

Y’all, they even had Disney themed tables at the reception, and I’m totally in love with this idea!

As a side note, you’ll never guess what their first song was!

“You’ve Got A Friend In Me,” from Toy Story.

How perfect is that!?

I knew well before Jason and I got engaged that I really wanted that to be the song that I had as my first dance.

One things for sure, they didn’t just have a wedding, they got married in style!