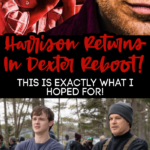 This is exactly what I wanted to happen in season 9, the return of Harrison, now I only hope the storyline matches the vision I have in my head for it!

In a new behind-the-scenes image from season 9 of Dexter, there is a teasing image of Harrison, Dexter’s son!

Harrison is being played by Jack Alcott and of course, he is all grown up, what I want to know is… did he acquire his own dark passenger due to the born-in-blood scene with the murder of his mother Rita?

At the end of the last season, Harrison left the United States with Hannah McKay with plans to meet up with Dexter later on.

We know that did not happen, and this leaves a lot of questions about what happened with Harrison and Hannah.

If you don’t remember, Hannah was the perfect match for Dexter, she understood him and she had her own dark side while still being a good person.

So far we know that Debra Morgan and John Lithgow are also returning… however we know that both of those characters are dead so they will probably play parts similar to Dexters Dad… just in his head.

I have a feeling that Hannah will also return, at least that is my hope!

I’ve written about it many times, but in my head, it seems like Harrison will have the same tendencies as his dad and Hannah will need Dexter’s help to channel all of that.

I guess we shall see soon enough! I’m so excited about this!