A couple of years ago I spent about two weeks laid up in the hospital and became completely obsessed with the show Hoarders. It’s one of the most disturbing and mesmerizing shows on television and all I could think at the time was, “I might be super sick, but at least my bathroom doesn’t look like THAT! Judgy, judgy, I know. And while I do feel for these people who hoard, I’ve always been a minimalist. Beyond minimalist, if you want to get down to it. I have a four bedroom home, huge backyard, and the sum total of less than 5K in stuff…and that includes my car. I’m just not a stuff person. 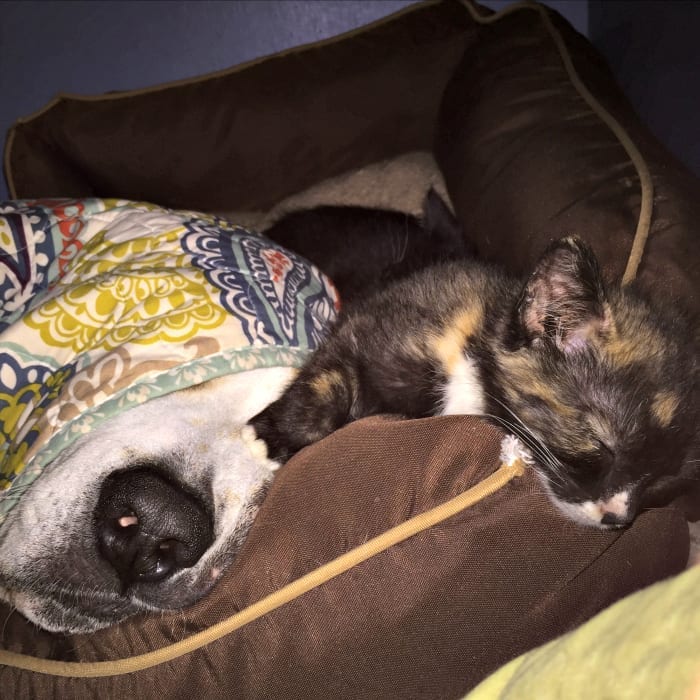 I AM, however, an animal person. And until recently that’s never been a problem. I had animals the entire time I was growing up for as far back as I can remember. During my teenage years we even lived on a farm where we had at various points: two dogs, two – three cats, 75 (or less, depending on dinner plans) chickens, 13 ducks, an uncountable number of baby ducks (sometimes they became dinner for other things), two pigs, and a deer (not really our deer, we rescued it from barbed wire…). Beyond that were all the animals who lived on our property. Herds of deer, foxes, possibly a wolf (I swear it was a wolf, but my family is still convinced it was a dog), several bears, though we never got close enough to count, and just about every other farm and forest related creature you could imagine.

And we’ve always been responsible pet owners. All of our animals had their shots, the domestics were all fixed, good healthy food, plenty of fresh water and room to run around…

All of that is still true. I want to start by saying that much. I’m not one of the scary hoarders like that show (or the one on Animal Planet, though I’ve never watched it), and this really was an accident – I swear.

It started out the year after my divorce. It was snowing outside and someone threw a puppy into my parents front yard. He wandered into the house, tiny as can be, and acted like he owned the joint. I fell instantly in love and named him Ollie. At the time I had no way to know that that tiny little guy would grow into a 180 pound behemoth of a dog, but that’s another story.

Then came Jane. When I finally moved out of my parents place, I was afraid Ollie would be lonely during the day, so I started thinking about adopting another dog. Then, a friend of mine said she had a dog she’d rescued who needed a new home. I met her and again, instant love. Only, Jane didn’t love me quite as fast. She was a super anxious dog. At some point she’d been abused and she wasn’t having me. In fact, she went about eating my entire house. I decided what Jane needed was something else to focus her attention on, so I adopted one of the feral kittens who had been born next door: Calliope.

Everything went along swimmingly for years until Ollie started slowing way down and I was afraid that when he passed away Jane would get lonely. So, into our lives came Melvin.

For those of you who are counting, that’s four. Four precious, love them more than life, animals. Not exactly hoarder status, so I’m still good. 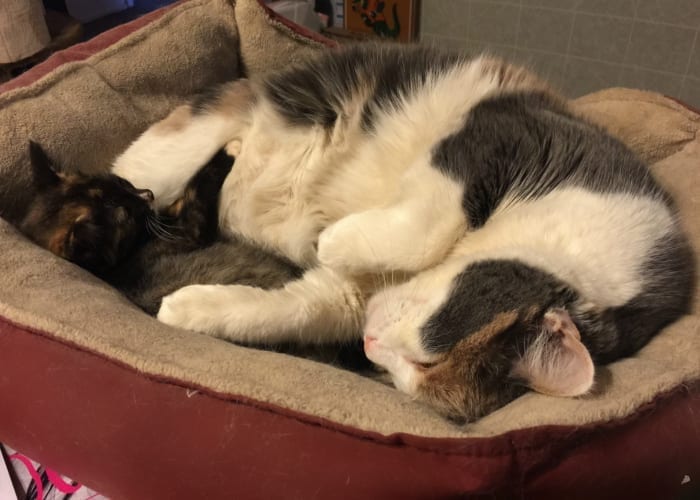 Then about a month ago I woke up one morning and realized that while I sleep in the bedroom with the dogs at night, Calliope waits outside my bedroom door for us to join her. Her little shadow paced back and forth in front of the door and it’s like she just couldn’t wait to play. How sad is that!?! I never meant for her to be this isolated lone kitty, but she’d also always been inside and outside and playing with other cats so I never figured it was a problem. Thing is, though, a few months ago, she was attacked by one of the outside cats and now she rarely goes beyond our back porch.

So I decided on ONE more adoption. Last one. Yes, yes, I realize it’s a lot of animals but I can’t have kids so this is my indulgence. Plus, no college tuition so I’m way ahead of you parental folk.

On the day I decided to go adopt a kitten I drove to the store to pick up some things ahead of time so I’d be ready. Then, on the way back I saw a cat lying in the middle of the road, hit by a car. My heart broke. I pulled the car over, got out and checked. She had definitely passed away. Tears in my eyes I moved her to the side of the road and that’s when I saw them…three tiny little itty bitty kittens shivering huddled up. Their eyes were barely open, and one of them let out the most pathetic sounding mew possible when I approached them.

I picked them up, bundled them into my hoodie, and called the lady I’d planned to adopt a kitten from: I wouldn’t be making it. 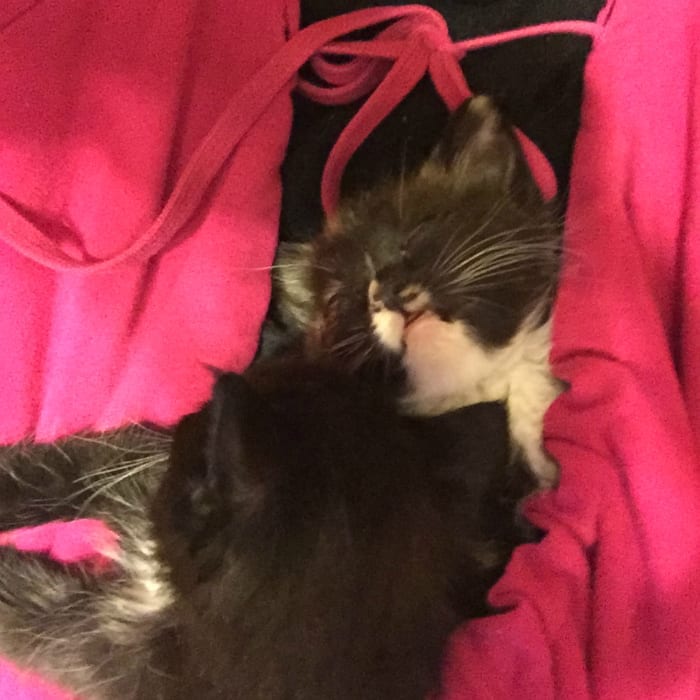 So now I’ve got three full grown dogs, one full grown cat, and three teensy eensy kittens. Seven animals. *hanging head* Yes, I realize you’re probably thinking I could nurture these kittens and then adopt them out, but let’s be real…that’s not going to happen. Instead, I’ll be getting two spays, one neuter, three new sets of shots and tests, three new microchips, and probably turning one of those empty spare rooms into a cat haven. I’m talking wall run, scratching boards, trees, cubbies, and one of those water fountains that trickles water so they’ve always got a fresh flow.

I’m super sad to say that four days after I found the kittens, the little boy – Cooper – passed away. He was too sickly and too tiny. It broke my heart all over again, but I’m happy to report that the other two are getting fat and feisty.

So six. I am the accidental hoarder of the Brady Bunch of adopted animals: three cats, three dogs. And the girl kittens? They’re named JJ and Kiwi.

Yes, I’m a hoarder, but honestly if you were an animal you’d totally want to be living with me, too. 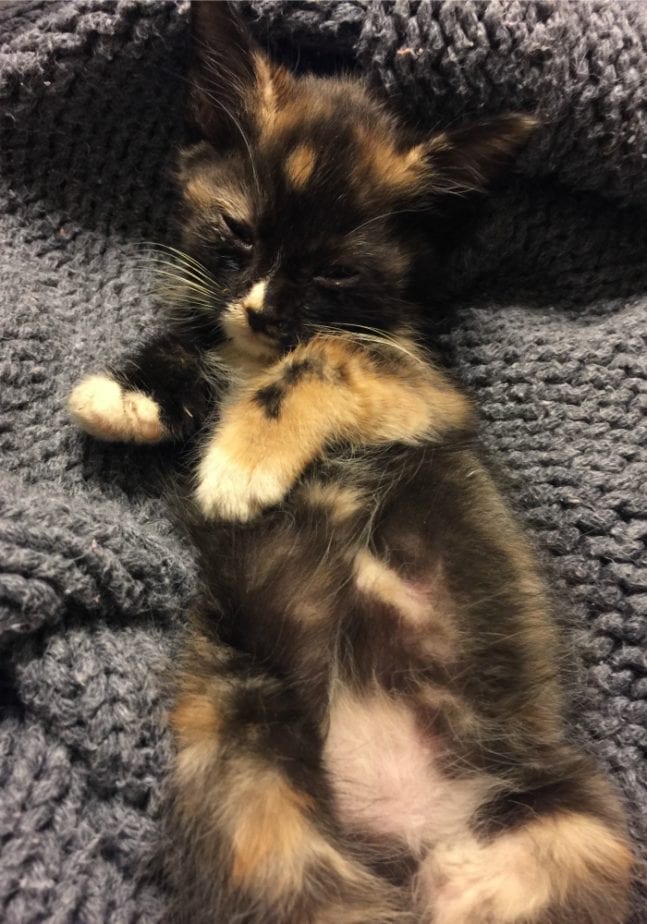 I have two dogs, four rabbits, two guinea pigs & one conure (parakeet). My mother and sister belittle me saying that I have a problem. I’m googling ‘hoarders’ trying to see if I have any characteristics. I just don’t see it! They are a lot of work but I enjoy feeding them and cleaning up after them. I don’t know. Maybe I am a hoarder. It’s certainly not a normal about of pets.

You sound more like an angel than a hoarder. I am the same way. If I see kittens on the side of the road, they're coming home with me.Then good luck getting me to give them up....although I do....to the right people.

If you're a hoarder of animals, then what does that make me? Up until recently we had a rottweiler called Milly, my daughter had a Kings Skink, which had a bunch of babies (several to be precise) She had kept the skink hidden without me knowing for quite a while! Then I got a kitten for my son which was a stray. 6 weeks later willow came along. She's a Chinchilla x Persian & my oldest daughter has claimed her. Then recently Aisha wandered into our lives.A 3 week old kitten, nothing but skin & bone discovered in the neighbours garden. She is fat & healthy now. We also have 2 female rats which belong to my 3 yr old & this weeekend we came home with scorpions. Yes you heard it right..... 2 baby scorpions. 16 animals in total & I'm even considering a Maine Coon kitten....... :/