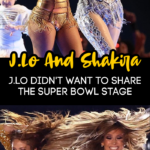 We all watch the Super Bowl for — well, the commercials. But, we also pay attention to whatever bigger and better performance they have come up with for the Super Bowl Halftime Show.

You have to admit, this year’s Dr. Dre Collab was one of The best halftime shows yet!!

But, remember a couple years ago when J.Lo took to the big stage at Super Bowl LIV?

Of course, this was before the whole Bennifer sequel of 2021 happened.

Jennifer was there performing with Shakira. Remember?

I thought it was a pretty strange duo at the time. But, I thought, “Whatever. They are probably friends or something.”

Turns out, the performers don’t really get to choose a whole lot about their performance during the halftime extravaganza.

Sometimes, they don’t even get to choose who shows up to sing with them on stage.

Hmmm. That makes me wonder about the time that Slash showed up to play with Fergie during the halftime show. That was such a bizarre-o collab.

Did J.Lo Want Shakira To Perform With Her During The Super Bowl Halftime Show?

Turns out, J.Lo didn’t want Shakira to appear with her during the halftime performance.

Netflix is dropping a new documentary all about Jennifer Lopez this week where she discusses this very thing.

Global superstar Jennifer Lopez reflects on her multifaceted career and the pressure of life in the spotlight in this intimate documentary.

According to the Huffpost, this documentary takes us on the stressful, whirlwind-of-a-time that J.Lo had in the days leading up to the Super Bowl Halftime performance.

We get a glimpse into the rehearsals that lead up to the show. They weren’t all fun and games.

Jennifer actually looks super stressed over the whole thing, especially the time constraints of the performance.

We have six f—ing minutes. We have 30 seconds of a song, and if we take a minute, that’s it, we’ve got five left. But, there’s got to be certain songs that we sing, though. We have to have our singing moments. It’s not going to be a dance f—ing revue. We have to sing our message.

Did J.Lo like the whole makeup of the Super Bowl Halftime show?

It seems that the answer would be, NOT REMOTELY.

Now, it seems like she is strictly talking about the time constraints of the show here, and not Shakira herself.

But, I don’t know. Apparently, the powers that be at Super Bowl Halftime HQ thought that the show needed two Latinas.

Typically, you have one headliner at a Super Bowl. That headliner constructs a show, and, should they choose to have other guests, that’s their choice — It was an insult to say you needed two Latinas to do the job that one artist historically has done.

There was another situation with the time constraints. The two women were only given 11 minutes to perform the entire halftime show.

Typically, performers get about 14 minutes. But, not THIS halftime show. They were duped out of 3 minutes.

It doesn’t sound like a big deal, but it actually would have helped a whole lot — especially with 2 performers.

In the end, they performed the hell out of their halftime show.

Get ready for Halftime to drop this Tuesday on Netflix.

You can watch the entire J.Lo and Shakira Super Bowl Halftime show HERE