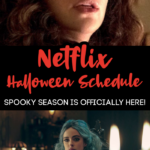 yes, I know, I know… Halloween is October 31st, which is next month… but the spooky season is HERE, I don’t care what anyone says… now is the time for all things creepy!

We watch scary movies in our home all year, but now is the time we amp it up.

That used to mean trips to the Blockbuster, but these days we have access to all sorts of streaming services to fill our need for ghouls, ghosts, vampires, demons, and witches!

Occasionally we will head to the theater to see a new movie as well, like in October we will be going to see Halloween Kills on the big screen and I can not wait!

Netflix has a ton of new titles coming to the streaming service and I have listed them below, so make sure to add them to your calendar!

Nightbooks is already available to watch on the streaming service and it’s a family-friendly movie starring Krysten Ritter as an evil witch.

Squid Game is another title that has already been added to Netflix, this is a Korean thriller series and if you’ve never watched Korean shows… you’re totally in for a treat!

Intrusion will be available for streaming on September 22nd and follows a couple and the creepy experiences they have after moving to a small town.

Midnight Mass will be available for streaming starting September 24th.

This series follows the strange events that happen when a priest moves to the isolated community on Crockett Island and experiences miraculous events and frightening omens.

The Chestnut Man will be available for streaming starting on September 29th and is a Scandinavian film that revolves around the investigation of the murder of a young woman.

Her body was found on a playground with a doll made of chestnuts next to her.

No One Gets Out Alive will be released on September 29th and is about an immigrant woman.

She’s forced to take a room in a boarding house, but she finds herself in a nightmare she can’t seem to escape.

Escape The Undertaker is available starting on October 5th, and it stars ‘The Undertaker’… yes the WWE star and it is an interactive horror movie where viewers watch it in ‘choose your own adventure’ style and I can not wait!

There’s Someone Inside Your House will be available starting October 6th, and it’s totally a teen scream-style film from the producers of ‘Stranger Things’ and ‘The Conjuring Universe’.

This is the story of a woman named Amanda who is terminally ill, she wakes up in a hospital to find a young boy named David that is questioning her and trying to make her remember something.

Night Teeth is as you can probably guess, a vampire movie, and it will be available starting on October 20th.

Hypnotic will be available for streaming on October 27th, I wasn’t able to find a trailer for it, however, I did find a little bit of information about the film.

Kate Siegel who is also in ‘Midnight Mass’, plays a woman who undergoes hypnosis that leads to disturbing consequences after several sessions.

Army of Thieves will be available for streaming starting on October 29th and is a prequel to Zack Snyder’s ‘Army of the Dead’.

Hopefully, this fulfills much of your spooky movie and television show needs this Fall!