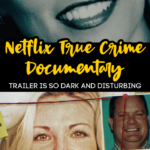 I’m pretty sure most of you are aware of the Lori Vallow and Chad Daybell story, right?

They were the couple that was at the center of the story of Lori’s two missing children.

I just watched the first trailer and the story is even weirder than I had originally thought.

They included old footage of Lori Vallow and it just gave me the creepiest and most uncomfortable feelings, this lady is definitely not ok in the head.

Being a good mom is very important to me, and a good wife. Being all those things together is not easy, so I’m basically a ticking time bomb.

Indeed she was a ticking time bomb…

The true crime Netflix documentary features Colby, the only surviving son of Lori Vallow and he reveals more about the story, including recordings of phone calls with his mother.

Her answer to that question kind of sums up this woman…

Lori Vallow and Chad Daybell were indicted in 2021 for conspiracy to commit murder as well as first-degree murder for the deaths of Lori’s 2 youngest children, Lori’s 4th husband, and her 5th husband’s wife.

The children were Colby’s younger brother and sister, Tylee was 17 years old, and JJ was just 7 years old.

Before her 4th husband, Charles wrote the following in an email he had sent before he was murdered.

She calls her own daughter a DARK spirit. Please help her.

The trial for Lori and Chad will start in January 2023, Idaho prosecutors are seeking the death penalty, while Chad and Lori have pleaded “not guilty”.

You can watch the trailer below, ‘Sins of Our Mother’ will premiere on Netflix on September 14th, 2022, and I will be watching!