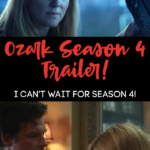 I am so excited for season 4 of ‘Ozark’ to come out!

I’m sad that it’s the final season, but man I can not wait because they’ve kept us waiting so freaking long for this!

Season 3 ended in a major way and I don’t want to give too much information in case this is a show you’re not caught up with yet.

Jason Bateman is one of my favorites, and his character, Marty Byrde, is brilliant in ‘Ozark’.

The streaming service, Netflix, released a trailer yesterday for the 4th and final season of ‘Ozark’ and it shows Marty and Wendy in a bathroom, attempting to clean the gore off of themselves.

Remember, they had traveled back to Mexico and were with the Cartel at the end of season 3.

Again, I don’t want to spoil anything, but if you know you know… if you don’t know, then you need to watch the first 3 seasons and get ready for season 4!

I feel like it’s going to be quite the ride!

Netflix still hasn’t given us a date on when we can start binging on season 4 and it’s driving me nuts, all I know is that it won’t be until next year still.

I’m interested to see what happens with Ruth Langmore since last season she went to join Darlene Snell.

Ruth is a great character, but she and Darlene just seem like a highly toxic combination, so we shall see.

This last and final season of ‘Ozark’ will be 14 episodes that have been split into two parts.

Are you ready? You can watch the first trailer from ‘Ozark’ season 4 below: