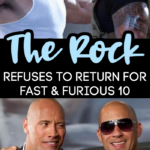 If you ask me, I feel like 10 movies is a bit much. But apparently Fast & Furious has made it work because they’re still going hard!

The internet is currently going crazy over the fact that Dwayne Johnson has turned down Vin Diesel’s personal invitation to return for Fast & Furious 10!

Not only did Johnson publicly refuse the offer, but also went after Diesel for his public plea about it, casting him in a negative light.

“I told [Diesel] directly that I would not be returning to the franchise. I was firm yet cordial with my words and said that I would always be supportive of the cast and always root for the franchise to be successful, but that there was no chance I would return. Vin’s recent public post was an example of his manipulation. I didn’t like that he brought up his children in the post, as well as Paul Walker’s death. Leave them out of it. We had spoken months ago about this and came to a clear understanding.”

“My goal all along was to end my amazing journey with this incredible franchise with gratitude and grace. It’s unfortunate that this public dialogue has muddied the waters. Regardless, I’m confident in the ‘Fast’ universe and its ability to consistently deliver for the audience… I truly wish my former co-stars and crew members the best of luck and success in the next chapter.”

Where’s Diesel’s public plea, you may ask? Well, it’s still up on Instagram. He never took it down. So now you can decide for yourself how to feel…

No one cares! Any actor who supports the shallow, incompetent, evil that’s currently President doesn’t matter to most of us. Don’t care to ever see another movie with him in it all.