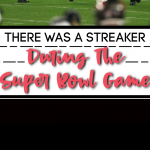 It’s officially not a Super Bowl game unless there’s a streaker.

Yeah, you read that correctly.

If you were watching the Super Bowl, you may have noticed a short game delay and that’s because the cameras didn’t show a streaker running down the field in his boxers.

The streaker managed to run from the middle of the field all the way down for a touchdown before he was tackled by a handful of security guards.

Yeah, he literally picked up more yards that the Chiefs did all night lol!

Believe it or not, people on Twitter are actually arguing whether or not the guy should be considered a streaker since he was technically clothed in black boxers.

However mid run, the man did manage to pull down his boxers and well, let me just say this guy definitely felt a slight breeze…

As if the Kansas City Chiefs weren’t already having a tough time, now people are even making fun of the guy earning more yards than the football players?!

First it was the horrible performance by The Weekend, and now there was a streaker on the field and oh yeah, Tom Brady has just won his seventh Super Bowl, what a game.

They call him the streak fastest thing on two feet don't look Ethel.