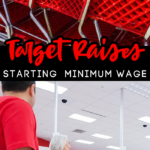 Targets wants to attract more workers to be employed at their stores.

So in order to attract more workers to wear the red tee, Target has decided to raise their minimum wage again, in hopes to receiving more applications.

For some positions, Target will be raising their starting wage up to $24 an hour for individuals who qualify.

In 2020, Target set its minimum wage at $15 which will remain in place, however, workers who qualify for the higher starting pay will based on the nature of their job and the competitive wages in their local market.

Beginning in April, employees who work a minimum of 25 hours a week rather than the previous requirement of 30 hours a week will be eligible to enroll in a health plan.

Target has also decided to shorten the time an employee has to work to receive health-care benefits three to nine months sooner.

The company also stated that it will provide additional benefits for employees including “virtual physical therapy at no cost, enhanced fertility benefits and other new wellness offerings, as part of most Target medical plans. Team members also will gain faster access to 401(k) plans.”

Target has explained that these changes come from a $300 million investment to spend on its workforce so if you’re looking for a higher paying job, Target is offering!