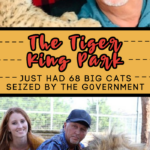 Jeff Lowe has lost about 68 big cats from his Tiger King Park in Thackerville, Oklahoma.

It was right about this time last year that we were all going nuts-o over Tiger King: Murder, Mayhem and Madness.

So much has happened in the ongoing saga that is the Tiger King since then, right?

It is the show that just keeps giving and giving.

We all know think that Carole Baskin fed her husband to her cats, Joe Exotic is divorcing Dillon, Carole Baskin was on Dancing With The Stars, Joe lost his zoo, came out with an underwear line, and Baskin even came out as bisexual.

Also, since the airing of the show, Jeff Lowe, who took over the Greater Wynnewood Exotic Animal Park, has opened a NEW animal park — the Thackerville zoo.

Of course, that is because Carole Baskin got the rights to Joe’s zoo.

But, this NEW zoo is in a bit of hot water at the moment.

Are we even surprised?

The government has gone in and seized a bunch of big cats as a result of three inspections of the Thackerville zoo, beginning in December of 2020.

Jeff Lowe and his wife, Lauren, were given several citations from the U.S. Department of Agriculture’s (USDA) Animal and Plant Health Inspection Service, including one for neglect of vet care and inadequate housing for the cats.

The Lowes received citations for failing to provide the animals with adequate or timely veterinary care, appropriate nutrition, and shelter that protects them from inclement weather and is of sufficient size to allow them to engage in normal behavior.

Since these inspections and citations, the Lowe’s have been “found in contempt after months of noncompliance.”

So, in order to save the big cats from the neglectful care of the zoo, the government has gone ahead and taken the cats into their custody.

This seizure should send a clear message that the Justice Department takes alleged harm to captive-bred animals protected under the Endangered Species Act very seriously.

As you can probably suspect, the Lowes were none-too-happy about the inspections and citations.

They went as far as to threaten and harass the officers along the way.

Lauren Lowe allegedly told one of the officers, “I’m gonna kill him” — talking about another officer who was working the case.

Nobody accused them of being the BRIGHTEST individuals on the planet.

I mean, you have Joe Exotic, who is in prison for plotting to kill Carole Baskin, but Lauren casually says she is going to “kill” one of the officers.

Jeff Lowe is willing to give up the big cats, in order to just end the lawsuit against him.

These people are just abusing us. And we can’t fight back and show people, ‘Don’t worry about the animals. They’re OK.’ Even for a brief second, I can’t post a photograph that’s on my phone because they consider that exhibiting.

Lowe’s attorney has now said that “the Lowes want out completely.”