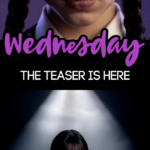 There is a new Addams Family series in the works, and I Can. Not. Wait!!

Wednesday Addams is pretty much my soulmate. I’d like to think we are twins separated at birth.

So, when I heard that Netflix is working on an Addams Family spinoff, I almost smiled — or smirked — or whatever the happy emotion is in the Addams Family universe!

But, when I found out that TIM BURTON is going to be at the helm of the show, I did a dark little dance.

There was also a rumor going around that Burton wanted Johnny Depp to play Gomez Addams.

In light of recent events, that’s not going to happen, but how freaking amazing would that be?!?

It looks totally macabre and a little twisted, in only the way a Tim Burton touch will do!!

In the teaser, which was released on social media, Wednesday Addams (played by Jenna Ortega) walks out of the shadows towards the camera.

We see her braiding those famous Wednesday Addams dark plaits, and then we get a full-on shot of her body.

She is spot-on as the ominous — somewhat haunting — Wednesday Addams.

As she is looking into the camera, Thing — the severed hand of Addams Family fame — hops up on her shoulder.

I love that Tim Burton made this version of Thing into, not only a severed hand, but a hand that’s stitched together — kind of like Sally in The Nightmare Before Christmas.

Now, we don’t know a whole lot about the show.

[Wednesday] follows Wednesday Addams’ years as a student, when she attempts to master her emerging psychic ability, thwart and solve the mystery that embroiled her parents.

According to IMDB, there is quite the cast for this upcoming Netflix original.

Luis Guzmán (who you will TOTALLY recognize from so many different things) plays patriarch Gomez Addams.

Of course, Jenna Ortega is going to play Wednesday Addams.

I’m just trying to finish up the second episode out of four with Tim, and the young actress who’s playing Wednesday [Addams] is really perfect, perfectly cast. She’s just Wednesday through and through and it’s a lot of fun.

It has also been leaked that Christina Ricci (formerly of Addams Family fame) has a “major” cameo role in the show.

There is no drop date for Wednesday, but according to IMDB, the show will be released sometime later this year.

Of course, we will let you know as soon as there is more information.

To see the Wednesday teaser, you can check it out HERE.