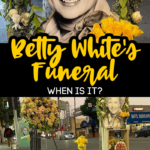 But, it was her time and I think she was ready to see her true love again.

The entire internet is filled with stories and images of the beloved Betty White.

I’m totally down for the ‘Betty White Challenge‘ too and will be making my own donations to my favorite shelter and rescues.

People have been binge-watching everything they can find that stars Betty White in it as well.

There is a huge selection to watch since she has been in the television and film industry since 1945!

There are even petitions floating around the internet to make a ‘National Betty White Day‘ and I can totally get on board with that!

When is Betty White’s funeral?

Betty White’s agent and close friend, Jeff Witjas, made an announcement on January 4th about the planning of her funeral.

Jeff Witjas told ET that arrangements are being made and also added that they’ll probably be private.

I’m not involved in that part, but she never sat with me and told me, ‘Jeff, when I pass, this is what I want.’ I didn’t want to go there a lot with Betty…I’m sure she had certain wishes, but I did not talk to her about that.

I don’t blame them, it should most definitely be a private event.

I don’t care how huge of a fan a person may be… this is for her actual family and friends.

Everything being done is being followed by her choices.

Fans have been leaving flowers and other mementos to honor Betty on her star at the Hollywood Walk of Fame.

Also, her 100th birthday celebration is definitely still on, so you can join in for ‘Betty White: A Celebration‘, which will be in theaters on January 17th, 2022.

There Are Rumors Surrounding The Cause Of Betty White’s Death

Sadly, there are already rumors floating around about what caused Betty White to die.

It has been revealed that she did die of natural causes.